Where to start on the news that World Rugby has decided to punt Romania, Spain and Belgium from Rugby World Cup 2019 qualifying, thereby handing automatic qualification to Russia and a lifeline to a to-date woeful Germany?

The ruling itself? The claims, and follow-up claims, made by Spain and Romania? The question of why World Rugby doesn’t have a simple database showing all players who have been registered (and capped) by other unions?

Nah, let’s begin with how the punting of those three teams affects Canada’s prospects of qualification.

Here’s the simple reality: assuming nothing gets overturned on appeal, the losing team of the Germany/Portugal versus Samoa series — now slated for the end of June and into July — will end up in the November final qualification tournament that currently only has Canada as a confirmed team.

It’s almost certain that that team won’t be Samoa. The other teams are still to be determined, but on history, they’ll be weak cousins in the group.

So, as things stand, Canada will be strong favourites in November, even if their recent run of form has been poor.

Let us not forget how Canada got here. They missed their first chance to qualify for next year’s big dance in Japan by losing a two-match series to the USA last summer. They scored but couldn’t play defence.

That led to coach Mark Anscombe being shown the door.

Kingsley Jones was hired to replace Anscombe last fall. On the eve of the team launching its November tour, Jim Dixon, who had been in charge of the national team programs as general manager since before the 2015 Rugby World Cup, was also shown the door.

Jones led the team to a mixed first tour, defeating Spain, but suffering lopsided losses to Georgia and Fiji.

Then, in the new year, was the two-match series against Uruguay, qualification attempt No. 2.

Again, the Canadians showed off plenty of attacking skill, but also plenty of defensive frailty. The Uruguayans, riding a high off a very, very successful 2017, started with their foot on the pedal in the series opener and didn’t let up until the final whistle in Montevideo a week later.

And so, yes, here we are, looking at a final chance that surely Canada will take. By the time the tournament begins, Jones will have been in charge a year. He’s got a slew of games between now and then — he’s got two friendlies against the Ontario Arrows this month, then three tests in June, followed by series in August and October — to prep his team and re-establish a functional defence.

Defensive play against teams in their skill range wasn’t a problem until the last couple years. Is the newer crop of players really all that different from the group Kieran Crowley first started cultivating in 2008? 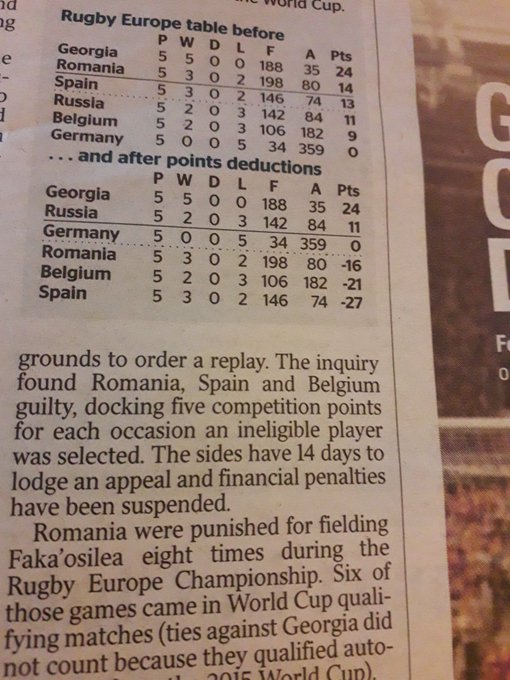 The reality is, with Romania and even Spain out of the equation (let’s be honest, Belgium were never going to factor), the only possible banana peel team could be Germany — and only if the Germans somehow get their house in order. Hans-Peter Wild, the German billionaire who owns French powerhouse club Stade Francais, had been bankrolling the German national squad until last fall, when a political dispute inside the German Rugby Federation saw him pull his funding.

There’s a reason Germany finished last in the Rugby Europe Championship, which was supposed to have seen Romania finish first until World Rugby came down hard on them and on second-placed Spain and also on fourth-placed Belgium. Germany just wasn’t that good without their handful of professional players and the funding Wild had been throwing at the national team.

But it’s hard to see how this German team that scored just 34 points across five matches and conceded 10 times as many points can really mount much of a fight in their playoff three weeks from now against Portugal.

Then again, the Portuguese were playing a division down from the Germans and that’s no fluke. It’s been a poor run for Portugal of late; why they are even in a playoff against the second-place team in the top division isn’t exactly clear, but given how badly Rugby Europe managed this whole process, it’s perhaps no surprise.

The other squads in the repechage will be either the winner of the Asian Championship (Hong Kong, one presumes) or the Cook Islands, and the second-place finisher in this summer’s Africa Gold Cup, a team like Kenya or Zimbabwe or Uganda. They’ll be physical, but lacking in polish.

As for the earlier questions, here’s our best take on it all. World Rugby’s ruling ignored the submission by Spain that the French Rugby Federation admitted they hadn’t told the two players Spain picked that turning out for France U20, declared as that country’s secondary “capture” team, would tie them to that country forever — a policy which is no longer allowed, by the way — and that World Rugby has since ruled that failing to have informed players of such was reason to release them from this national binding retroactively.

Instead, the World Rugby panel focused on a rather creative argument put forward by the Spanish, that the French federation had been playing fast and loose with the national capture regulations (France U21 one year, France U20 the next, then France A and so on, when they were only supposed to be allowed to switch things up every four years). In the end, the panel said “nice try, Spain” and sent them on their way.

I do think that Spain’s case is reasonable and what they presented had merit. We’ll see if there’s any followup on that. It also exposes the folly of the capture team concept, which means a lot of players who would be of international standard for a lot of other countries are denied the chance to truly play at that level because they’re deemed to be too close to the fringe of another. There are a lot of players in New Zealand, for instance, who have been on the edge of the All Blacks but really aren’t ever going to get there; and yet, they play a game for New Zealand’s second team and their chances of playing for Tonga or Samoa or Fiji are pretty much over. It’s one thing to be made ineligible because you played for a country’s best team; it’s a whole other thing to be denied the chance to play for another country’s top team because you played for another’s second-tier squad.

The cases of Romania and Belgium were far more cut and dried: the Belgians had misunderstood World Rugby’s regulation, which allow for players to claim eligibility for a country other than that of their birth if their parents or grandparents were born elsewhere. The Belgians thought it went all the way to the great-grandparents, which apparently is what Belgian law allows for claiming citizenship. The Romanians, on the other hand, were somewhat guilty of not asking all the right questions and also dealing with a clearly rather disorganized Tongan Rugby Union. The Romanians did enquire whether Sione Faka’osilea had played for Tonga’s national XVs team, which he hadn’t, but not about the sevens team. And the TRU didn’t volunteer the information that he had, which made him ineligible (though the Romanians would have had an Olympics loophole they could have used to bring him into their fold, had they known).

In all three cases, World Rugby expressed great disappointment in the work of the national unions and in Rugby Europe’s supervision of it all. But we are left with the question: Why is this so complicated? Why does World Rugby not have a central registry showing who has played for a national squad and in what form? Soccer does it; surely rugby can manage, too.

Oh, and by the way, Romania, Spain and Belgium do have two weeks to mount an appeal. Romania have already declared their intention. Spain will surely follow.

This really isn’t going away. Not yet, anyway.